We are pleased to share the thoughts of Dr Gyorgy Tatar, Chair of the Budapest Centre, on the operalization of the Responsibility to Protect.

You may read the article if you click on this link.

Capabilities of the Visegrad Group in Preventing Extremism 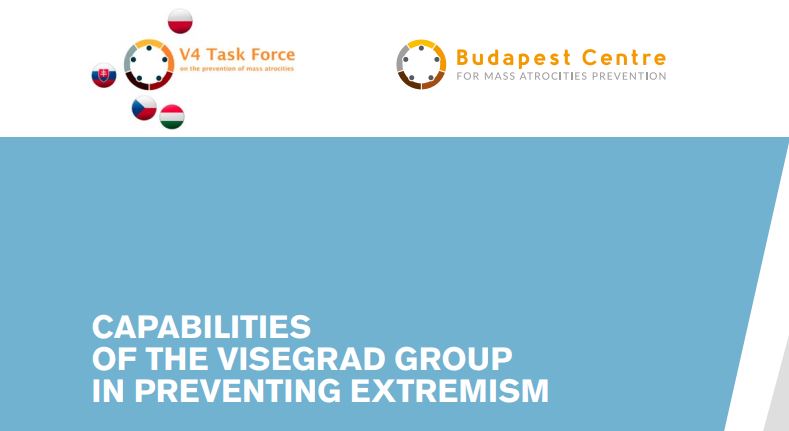 Please click here to find the latest report of the Budapest Centre, through the project V4 Taskforce on the Prevention of Mass Atrocities, on the Capabilities of the Visegrad Group in Preventing Extremism.

Advocacy to Prevent Intolerance, Discrimination and Group-focused Enmity of Youth in Bulgaria, Germany and the Visegrad Group

As part of the project “CEE Prevent Net – Central and Eastern European Network for the Prevention of Intolerance and Group Hatred”, an interdisciplinary team of researchers and prevention practitioners from Bulgaria, the Czech Republic, Germany, Hungary, Poland and Slovakia has investigated into advocacy and communication strategies for advancing prevent work in the region. They have reviewed existing strategies and good practices, conducted field work and interviewed about 150 governmental and non-governmental stakeholders in youth affairs and prevention from different professions and ends of the political spectrum.

Their final report offers strategies and recommendations for practitioners and civil society to engage in political advocacy to prevent intolerance, discrimination and group hatred of youth. In particular, these recommendations focus on the possibilities for advocacy under unfavorable conditions in contemporary (Central and Eastern) Europe, such as growing levels of group hatred and right-wing extremism, shrinking civic space or the erosion of human rights standards, media independence and the rule of law, which pose a serious threat to peaceful and democratic societies in the region.

Task Force on the European Union Prevention of Mass Atrocities

The Initiative to establish the Task Force was launched by the Budapest Centre to assess the capabilities of the European Union to prevent mass atrocities. The Task Force was co-chaired by Professor Christoph O. Meyer (King’s College London) and Professor Karen E. Smith (London School of Economics). It was made up of leading European academics, experts and practitioners and produced the ‘Report on EU and Prevention of Mass Atrocities’ which was released at a public event in March 2013 and presented directly to the European External Action Service (EEAS) and other key decision makers in EU institutions and Member State governments.


The core aim of the report was to review the existing tools of the European Union for the prevention of mass atrocities and make recommendations to optimize timely and adequate responses to emerging threats of mass atrocities.

African Regional Communities and the Prevention of Mass Atrocities

The African Task Force on the Prevention of Mass Atrocities (ATF) was an 18-month initiative of the Budapest Centre for Mass Atrocity Prevention, which analyzed the capacities of five regional organizations in the prevention of mass atrocities. The organizations were selected due to their existing peace and security mandates and architectures, their regional influence in addressing and preventing future crises, and their prior policy focus on the prevention of genocide. They were the following:

In the course of the study, the ATF has deployed a mass atrocity lens encompassing phenomena including war crimes, crimes against humanity, ethnic cleansing, genocide, and mass killing, with a particular interest in protecting civilians and non-combatants from violence. The analytical framework deployed in the research is based on three pillars of prevention, including early warning, the operational capacity to respond, and political will. This final report reflects the outcome of desk research and interviews conducted by the members of the task force, as well as the result of five subsequent workshops and bilateral interviews organized with the senior management of the relevant organizations in Africa.

We strongly encourage our visitors to take a look at this research, since it remains strikingly current and useful. Please download the document here, which is also available in French. Plus, you can retrieve further information on the Facebook page of the African Taskforce on the Prevention of Mass Atrocities.