Conference Report "Capabilities of the Visegrad Group in Preventing Extremism"

On June 23, 2017, the Budapest Centre for Mass Atrocities Prevention presented the final Report of the V4 Task Force: “Capabilities of the Visegrad Group in Preventing Extremism” during the conference hosted by the Hungarian Institute for Foreign Affairs and Trade (IFAT).

The conference was addressed by the Deputy Director of the Institute of Foreign Affairs and Trade, Ugrósdy Márton, and the Deputy RtoP Focal Point, Ministry of Foreign Affairs and Trade of Hungary, Gergő Szirma, as well as by Prof. Alessandro Orsini Director of the Observatory on International Security at LUISS Guido Carli University in Rome. During the conference, experts coming from Hungary, the Slovak Republic, Poland and the Czech Republic, shared the empirical findings of their desk and on-field research, outlining the challenges the Visegrad countries face when confronting with the consequences of the 2015 refugee crisis, which increased social tensions and fostered isolationist sentiments and xenophobia across the region.

The final Report of the V4 Task Force: “Capabilities of the Visegrad Group in Preventing Extremism” was presented in Budapest, Hungary, on 23 June 2017, hosted by the Institute for Foreign Affairs and Trade (IFAT).

The event was organized by the Budapest Centre for Mass Atrocities Prevention and financially supported by the International Visegrad Fund.

The realization of the Report would have not been possible without the valuable contributions of experts who conducted both desk and on-field research and conducted interviews in the four Visegrad countries: the former and current members of the Institute for Foreign Affairs and Trade of Hungary, Ambassador István Lakatos, Ambassador Marianne Berecz, Mr. Márton Ugrósdy and Ms. Lúcia Hörömpöli; Professor Agnieszka Bienczyk-Missala, for the University of Warsaw – NOHA; Dr. Samuel Goda and Ms. Klaudia Bánaiová, representing the Slovak Foreign Policy Association – SFPA, and Mr. Jaroslav Valuch for his activities in the Czech Republic.

The conference was the culmination of the 10 month-long activities of the V4 Task Force, established by the Budapest Centre, it officially launched the Task Force’s findings about the capacity of the Visegrad group to prevent extremism within the context of the Responsibility to Protect. As the Report points out, despite the absence of imminent risks of RtoP relevant crimes, and the evident regional institutional resilience, growing signs of extremism and radicalization are jeopardizing the overall political and social landscape of the region.

Exacerbated by the global and economic financial crisis, which raised the V4 countries’ levels of poverty and unemployment, the 2015 migration crisis eventually increased the number of socially marginalized people in the region. The crisis intensified opposition to diversity and strengthened isolationist sentiments and xenophobia, giving rise to widespread social polarization and fostering hatred narratives. Both institutions and social actors are eventually called to collaborate in order to find a comprehensive and long-lasting solution to these challenges.

The conference outlined the Report’s insights concerning the difficult political situation these countries are currently undergoing, as well as practical and tailor-made recommendations to finally implement a robust mechanism for hate speech and hate crimes prevention.

Welcoming remarks were offered by the Deputy Director of the Institute of Foreign Affairs and Trade, Ugrósdy Márton, and the Deputy RtoP Focal Point, Ministry of Foreign Affairs and Trade of Hungary, Gergő Szirma. They both stressed the need to reverse the vicious circle the development of hate speech practices and polarization has brought about and enhance regional cooperation and monitoring mechanisms. Prof. Alessandro Orsini, Director of the Observatory on International Security at LUISS Guido Carli University in Rome delivered the keynote speech. It examined, from a sociological point of view, the psychological and social implications of an individual’s radicalization process. Through the model of Disintegration, Reconstruction, Integration and Alienation (DRIA), he defined the path along which radicalization occurs and extremism derives.

The process begins with the gradual and progressive disintegration of an individual’s social identity that leads to his/her subsequent social marginality. The second step, through the creation of a new social identity, involves the acquisition of a “binary code mentality” that requires the individual to choose which social identity he wants to assume. Then, when the integration of the individual in the new extremist political and religious group has taken place, as envisaged by the third phase, he eventually comes to definitively detach himself from his surrounding environment.

Prof. Orsini underlined that disintegration does not necessarily lead to radicalization; however, it does when the reconstruction of the social identity is made through a radical ideology (“cognitive radicalization”).

He stressed that this well-structured sociological model may help explain the recurrence of hate crimes and, consequently, to develop an effective mechanism for prevention. In fact, by understating how the phases of Disintegration and Reconstruction may shape people’s mindset, it is possible to examine the way in which individuals become embedded in a radical mental universe, characterized by precise cognitive features, as part of a new anthropological category. The Professor underpinned his theory by discussing some of the experiences he collected during his career as a researcher. 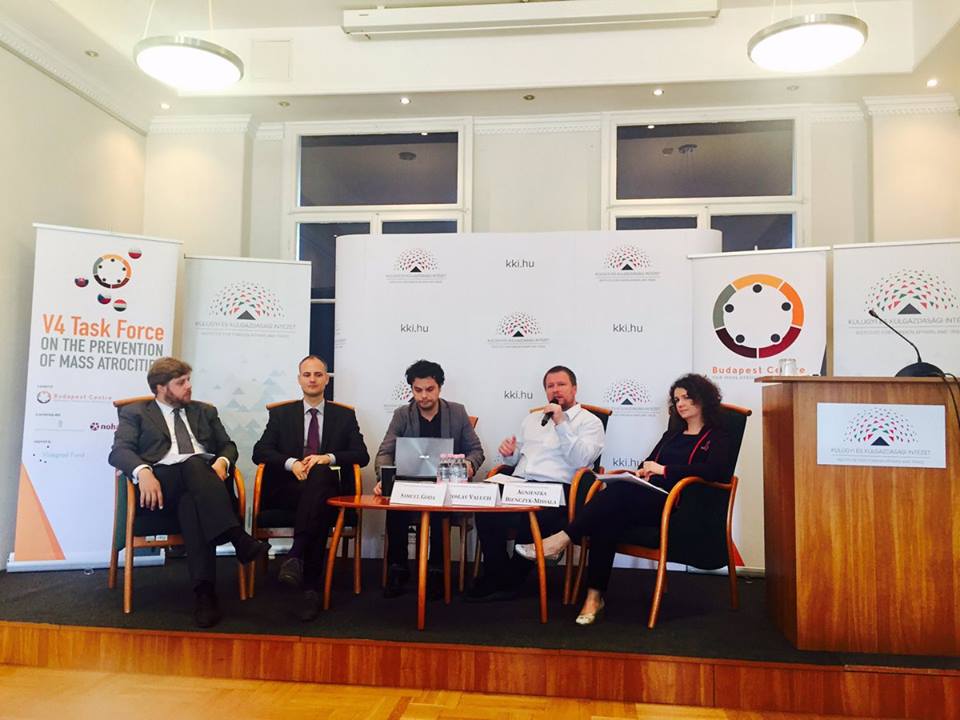 The participants were then briefed by the Chair of the Budapest Centre, Mr. György Tatár on the main findings and the recommendations of the V4 Task Force Report. He underlined that although there is no imminent risk of RtoP relevant crimes in any of the V4 States signs of radicalisation and hate speech are growing across the region. The migration and refugee crisis of 2015 increased opposition to ‘diversity’, strengthened polarization, isolationist sentiments and xenophobia within societies. There is a gap between legislation and law enforcement in the field of countering extremism. He stressed the role of politicians and social media in fuelling radicalization and called for zero tolerance of speeches which stigmatize and discriminate.

As to the implementation of the recommendations of the Report he highlighted the intention of the Budapest Centre to contact the Presidency of the Visegrad Group.

During the second half of the conference the researchers of the Task Force briefed the audience on the national challenges in preventing extremism in the region.

Jaroslav Valuch underlined that polarising tendencies are becoming increasingly accepted across Czech society. He stressed that hatred towards Roma, migrants, and religious minorities, namely Muslims, is embedded within the society. Although it is difficult to grasp the full extent at which extremism impacts on its victims, it is essential to examine this phenomenon from a broader and multidisciplinary perspective, in view of providing a more comprehensive understanding of its social consequences.

Prof. Agnieszka Bieńczyk-Missala, from the University of Warsaw, summarized the evolution of the social polarization trends Poland is currently witnessing. As she argued, hate narratives have specifically targeted Muslims and Arab-looking people, and culminate in series of direct and violent personal attacks. She underlined that the widespread absence of strong political reactions to serious incidents is eventually preventing people to trust the capability of national authorities to ensure protection for human rights. Despite the role of social media in disseminating a negative image of Muslims, she stressed their potential capability in effectively countering extremism and radicalization. In light of this, Prof. Bieńczyk-Missala stated that the eradication of hate speech represents a challenge that requires closer cooperation between multiple actors. To this end, raising awareness about human rights protection and enhancing political will to fully comply with constitutional provisions is essential to shape and develop tolerant social attitudes.

The experience of the multi-ethnic, multinational and multi-confessional Slovak Republic in facing the challenges posed by the rise of extremist narratives was accurately presented by Mr. Samuel Goda, representative of the Slovak Foreign Policy Association.

As underlined, the Slovak government, when called to face the consequences of the 2015 and 2016 migration and refugee crisis, lacked clear and effective mechanisms to prevent the diffusion of hate speech and social polarization. However, the government succeeded in drafting and adopting a document “Conception on the fight against extremism for 2015-2019” which focused on the implementation of strategies aimed at combating extremism, enhancing mechanisms for prevention, raising social awareness and ensuring regional and international cooperation.

In relation to the role of social actors (social media, academia, churches NGOs), Mr. Goda stressed that despite the efforts of the traditional media to serve as a watchdog when it came to manifestations of radicalization and extremism their activities were undermined by the so-called “alternative” media. He highlighted the pivotal role of NGOs in fighting and tackling the consequences of radical and extremist practices and called the attention of the audience to the best practices of some Slovak NGOs in this field.

Eventually, he underlined the necessity to enhance the role of the Slovak educational system, as a key tool in preventing extremism and pointed to the ongoing reform process which will be completed by 2018. Márton Ugrósdy, Deputy Director of the Institute for Foreign Affairs and Trade, spoke about the rise in radicalization trends Hungary had experienced in the last couple of years. As a consequence of the refugee crisis, a shift in hate speech’s target has been observed, from “traditional” exposed communities towards migrants.

Undoubtedly, social media platforms have facilitated the dissemination of extremist perspectives. He emphasized that controlling the content of closed social media, is beyond the reach of Hungarian authorities. At the same time, the more traditional fora, like the comments sections of online newspapers, blogs and websites are better regulated. This is due to the fact, Mr. Ugrósdy stressed, that Hungarian media law makes the publisher accountable for the content of the hate-loaded user comments, and that, therefore, they are compelled to mitigate these trends. The conference was closed by prof. Enzo Maria Le Fevre Cervini, Director for Research and Cooperation at the Budapest Centre, who encouraged the audience to pay attention to the specific positive trends Europe is witnessing. The election of Emmanuel Macron as the new President of the French Republic, for instance, helps us remember that extremism, xenophobia, antisemitism and radicalization can be effectively tackled, and that the vicious circle in which Europe is being embedded can be hopefully reversed.