On November 16, 2016, the Budapest Centre for Mass Atrocities Prevention organized a Roundtable as its traditional Pre-event of the 9th Budapest Human Rights Forum in cooperation with the Institute for Foreign Affairs and Trade and the African-Hungarian Union.

At the event, African and European experts exchanged views on the implementation of the policy recommendations of the African Task Force Final Report on the Prevention of Mass Atrocities. Ambassador Istvan Lakatos touched upon issues on the implementation of Universal Human Rights Standards in Africa, highlighting recent positive and negative developments as well. Mr. Haile Yohannes, representative of the Ethiopian Orthodox Church proposed an Ethiopian perspective for risks of mass atrocities whilst giving an overview of the Gambella region’s ethnic conflicts, Mr. France Mutombo Tshimuanga, Director of the Foundation for Africa stressed the need for an educational approach to resolve the crisis of human rights on the continent stressing that educating people is key for generating a change in mentality and sensitivity.

On November 16, 2016, the Budapest Centre for Mass Atrocities Prevention organized a Roundtable as its traditional Pre-event of the 9th Budapest Human Rights Forum in cooperation with the Institute for Foreign Affairs and Trade and the African-Hungarian Union. The event aimed at presenting the outcome of the two-year activities of the African Task Force on the Prevention of Mass Atrocities and generating political will to implement the recommendations of the Report prepared by the African Task Force. 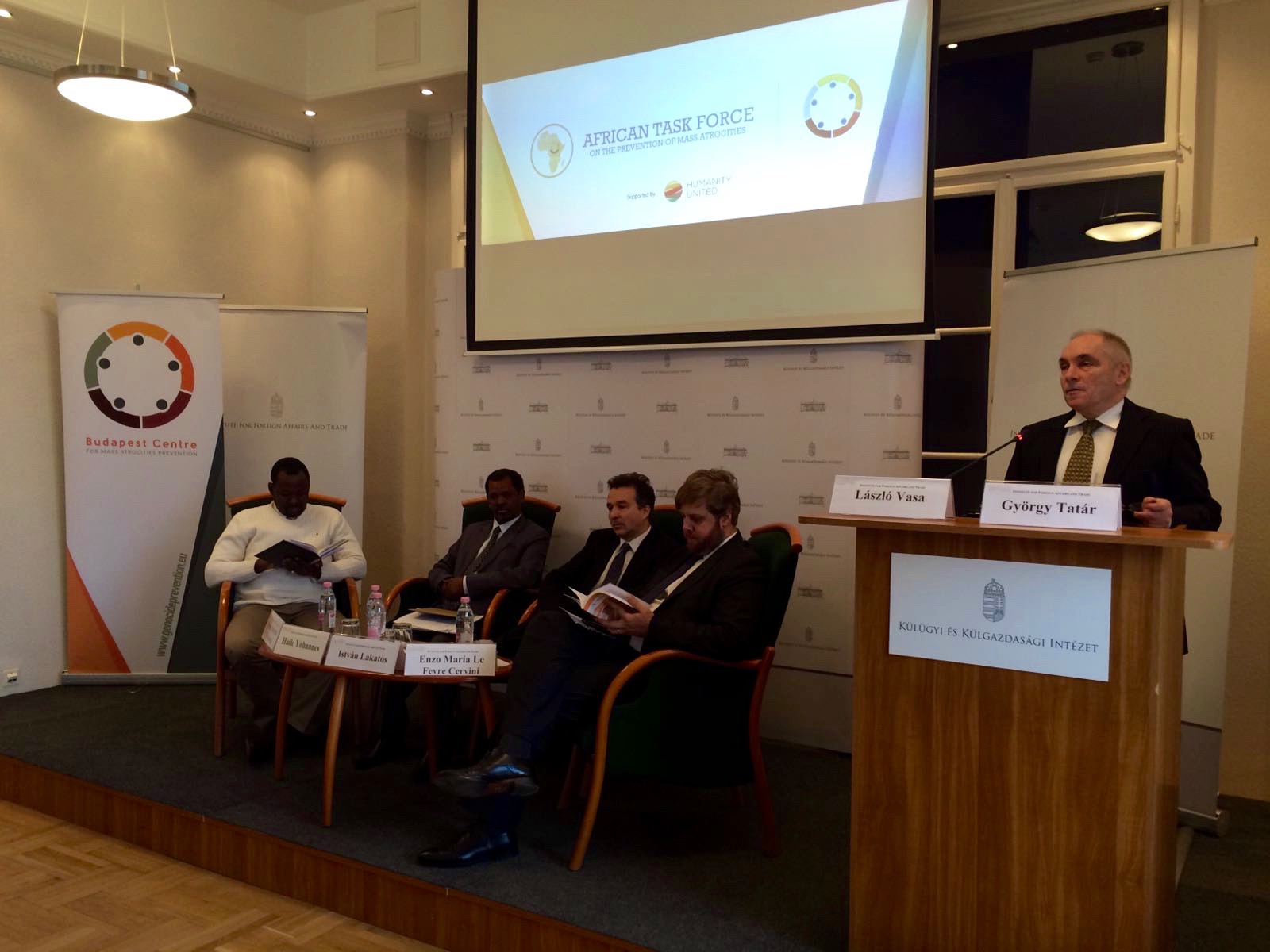 Mr. László Vasa, Deputy Director General of the Institute for Foreign Affairs and Trade opened proceedings with a quote from John Prendergast, an American human rights activist to emphasize the importance of the event:

“The biggest roadblock to action on genocide and other human rights crimes is ignorance. Most people just don’t know that such things are happening, and often, if they have a vague idea they are happening, there is a feeling that there is nothing that can be done to stop these crimes.”

In his introductory speech Mr. György Tatár, Chair of the Budapest Centre, highlighted some lessons learned during the project, which mapped preventive capabilities of five African regional organisations through the mass atrocity lens. He recalled that in the course of its activities in Africa, the Budapest Centre capitalized extensively on experiences obtained in 2012-2013 when assessing the strengths and weaknesses of the EU capabilities to prevent mass atrocities.

He underlined that despite the complexities of problems associated with mass atrocity prevention, efforts to develop regional and national capacities in Africa should be continued, bearing in mind that there is no quick solution for these challenges.

He added that due to the high sensitivity of such problems, strategies and tools for preventing mass atrocities should be tailored and implemented by exclusively local stakeholders, as they possess local credibility, and also favour solutions which correspond with local customs and therefore have increased legitimacy for local people. External actors should provide assistance for local actors in these efforts as representing the best guarantee for sustainable settlement of conflict situations in Africa. In that context, he found it imperative to establish the African network on mass atrocities prevention. 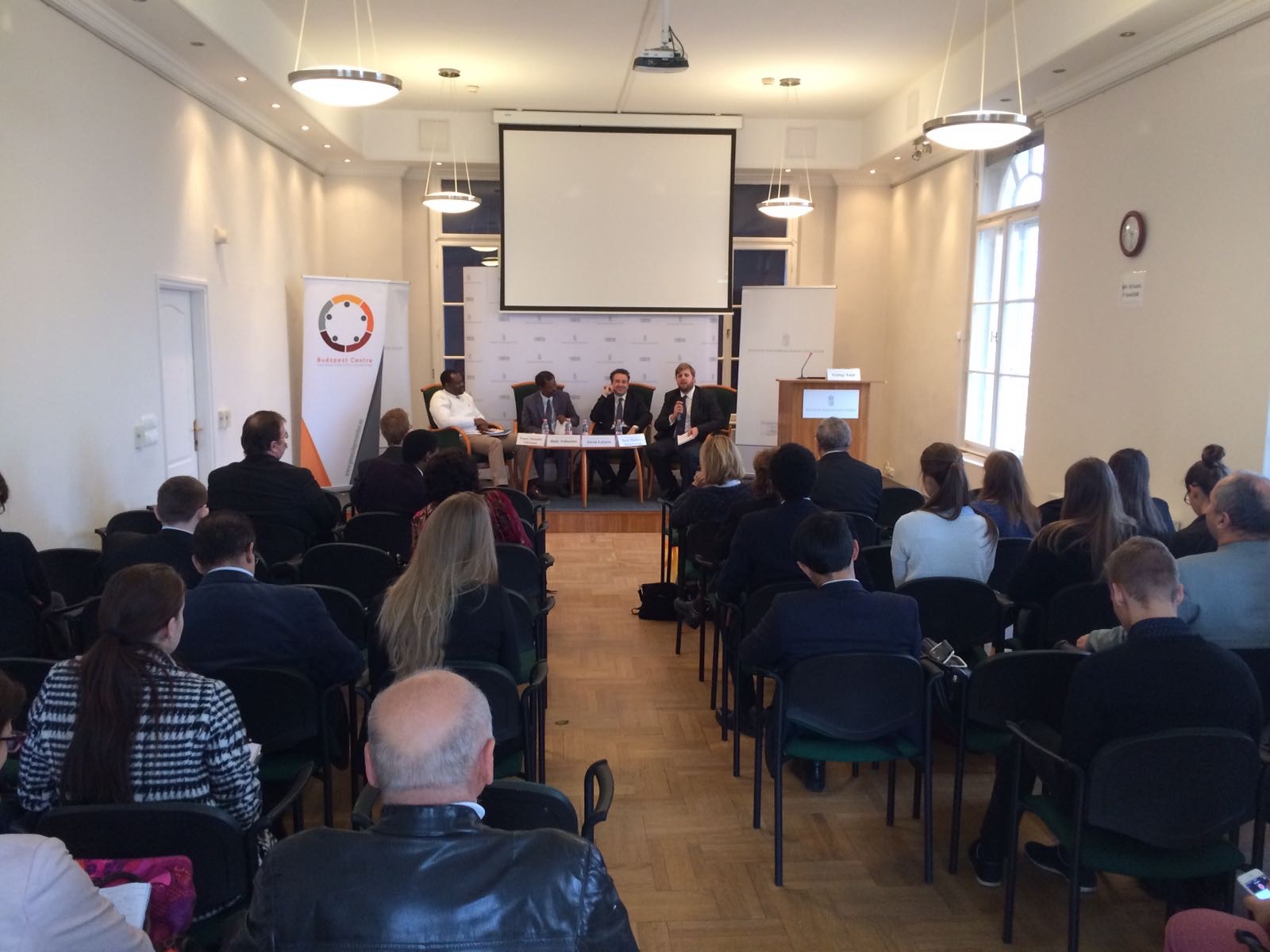 He also highlighted the importance of joint skills building between African regional organizations and member states to enhance the application of mass atrocity prevention and for shaping a common approach for responding to mass atrocity-specific risks. As for long term tasks, he prioritized three shortcomings to be addressed: the lack of political will, understaffing of regional organizations and state administrations dealing with mass atrocities prevention, and the underutilisation of experience and information sharing at continental and regional levels.

The ensuing Roundtable was opened by Ambassador Istvan Lakatos who touched upon issues on the implementation of Universal Human Rights Standards in Africa. He mentioned that there exists some apparent conflict between universal human rights and cultural norms, which sometimes are presented in the guise of a sort of ‘clash of civilizations’. However, he stressed the importance in understanding that the discussion is not about the denial of certain rights; it is more about variances in implementation of human rights because of cultural differences. 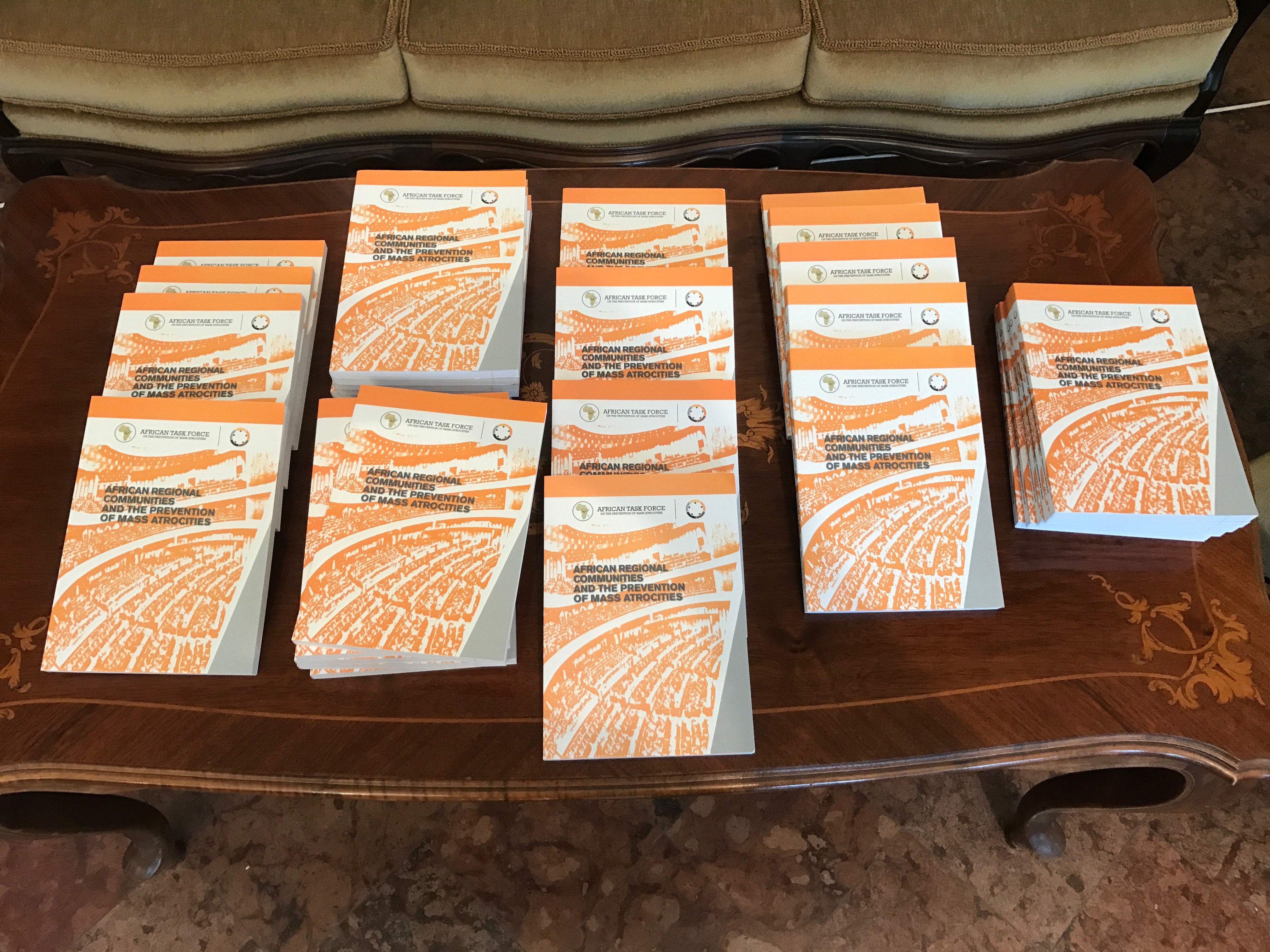 He briefly reviewed how the different regions implemented recommendations they have received and accepted during the UN Universal Periodic Review: the highest percentage of recommendations that triggered action during the first 4 years long round of the UPR was 63 % in case of the Eastern European Group, followed by 53 % of the Western Group, then it is Africa with 50 %, followed by the Latin American Group at 49%, and the last one is Asia with 33%. He also mentioned a few promising court decisions addressing traditional practices in the continent and presented the outcomes of relevant research in the field of human rights and minorities rights.

Finally, he stated that human rights movements should not be against the existence of customary or religious law in the continent. They should rather contribute to their transformation, as culture should also change by time – quoting a recent statement of the court of Botswana.

In his presentation, Mr. Haile Yohannes, representative of the Ethiopian Orthodox Church proposed an Ethiopian perspective for risks of mass atrocities whilst presenting a view of the Gambella region’s ethnic conflicts.

Mr. Yohannes gave an overview of the challenges in the Gambella region. The region counts several ethnic minorities (Nuer, Agnuak, Mejenger, Opo, Komo, Amhara, Tigray, Oromo, SNNP etc.) as well as numerous different religious beliefs and represents one of the hotspots threatened by tribal conflicts. He outlined the major features and causes of tribal conflicts in the region (high competition for natural resources and power, the long held animosities and historical grievances, psycho-cultural differences, customs of revenge among ethnic groups etc). Mr. Yohannes also presented a summary of past and current efforts to resolve the regional conflicts.

He concluded by stating that one of the fundamental causes of tribal conflicts in Gambella has been the extensive and abusive erosion of human rights. Thus, future efforts must be aimed at restoring human rights in the region.

The third panellist, Mr. France Mutombo Tshimuanga, Director of the Foundation for Africa stressed the need for an educational approach to resolve the crisis of human rights in Africa. He emphasized that education plays a fundamental role in the preventive processes too. He highlighted that educating people is key for generating a change in mentality and sensitivity. Civil education as conceived in Africa is not sufficient; therefore, future leaders grow up with not even a basic knowledge of human rights.

Having given an overview of ongoing atrocities in the Democratic Republic of Congo, he proposed an optimistic and a pessimistic approach. According to the pessimistic vision, Mr. Mutombo asserted that the international community is not, and will not be able to halt the flow of violence within the continent in the foreseeable future. As to the optimistic approach, he added that advocacy and provision of recommendations for the state agents can substantially reduce the adverse trends. More specifically, he pointed to the need of focusing on preventing the perpetration of “the smallest crimes” by intervening early on at the level of individuals. 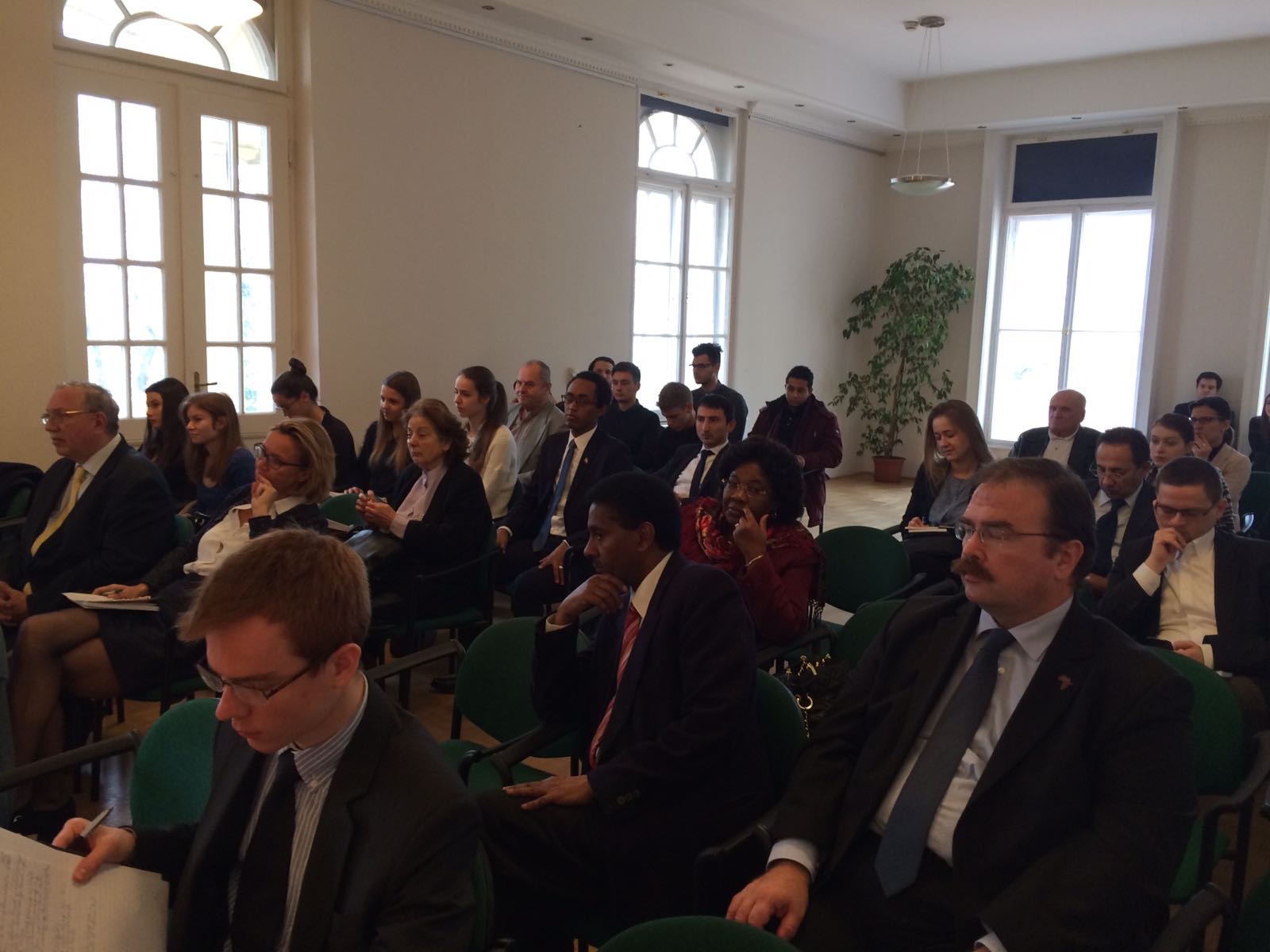 He also shed light on the ambiguous stance of some African states towards the prevention of gross human rights violations: while they argue for the promotion of peace abroad, mass atrocities are committed on their ground.

Mr. Mutombo highlighted how appropriate it is to talk about Africa here in this country, since Hungary does not have a colonial history thus making it impartial regarding African issues.

The debate facilitated by Dr. Enzo Maria Le Fevre Cervini, the Director of Research and Cooperation of the Budapest Centre was lively and constructive. The questions mainly concerned the implementation of the capacity building exercise outlined by the ATF Report.