The BC @ "Social Business for Zero Hunger" 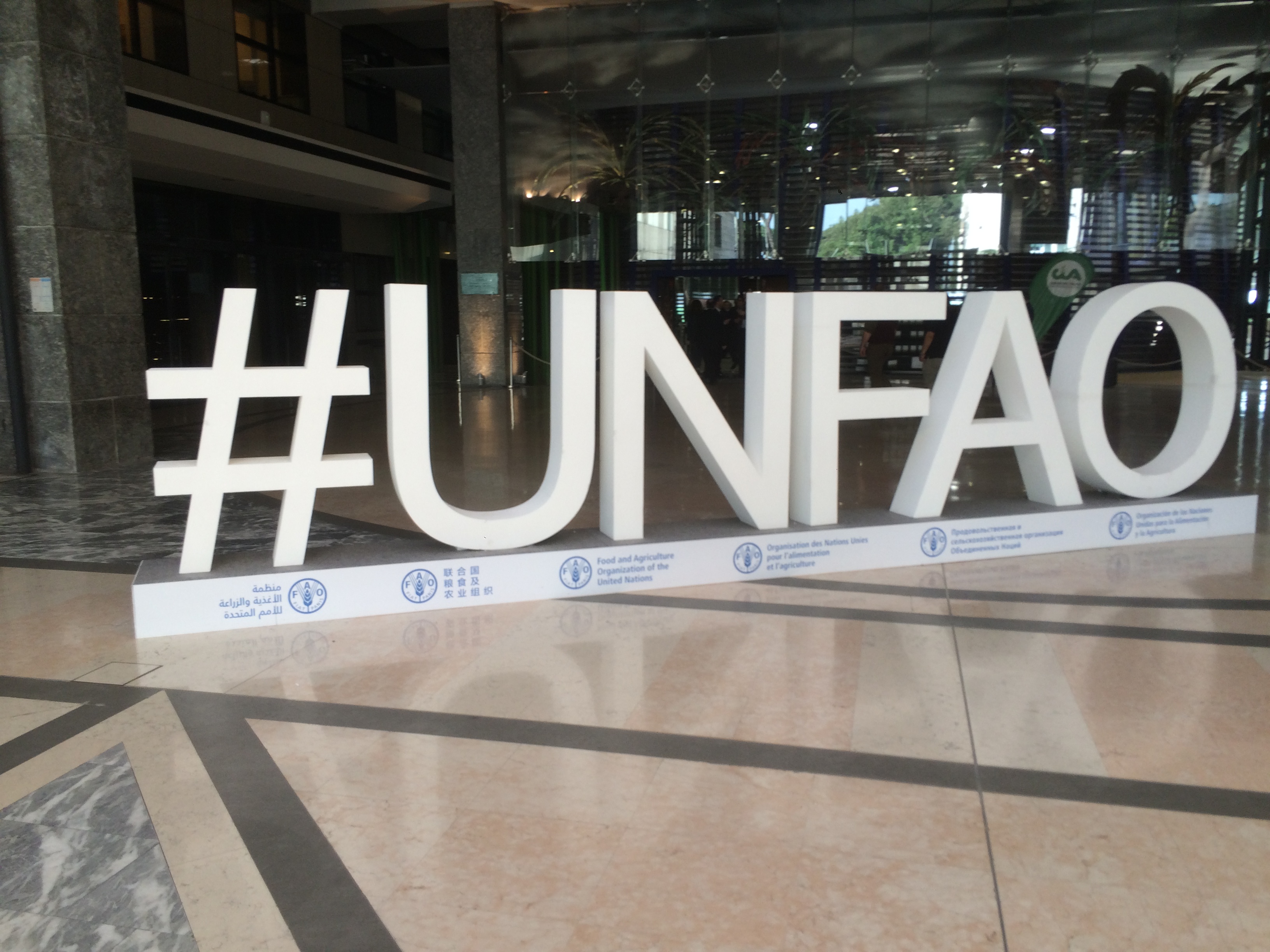 The launch event of the call to action brought together representatives from governments, the private sector, multilateral organizations, civil society, academia, crisis-affected communities, citizens, and students. All participants involved were called to answer to one main question: how can we act together to create development and eradicate hunger and poverty through Social Business?

The event, which was organized by Social Business Italia, Yunus Social Business Centre University of Florence, CIA Agricoltori Italiani, Grameen Italia Foundation, ARCO (Action Research for CO-development), opened with the welcome remarks of Mr. Josè Graziano Da Silva, FAO General Director, who highlighted the commitment of FAO, as UN agency, in fighting poverty and hunger in the world. Institutional greetings were made by HE Maurizio Martina, Italian Minister of Agriculture, Hon. Marina Sereni, Vice President of the Chamber of Deputies, and Dino Scanavino, President of Confederazione Italiana Agricoltori, who stressed both the international and Italian commitment in supporting local businesses and international organizations in the promotion of food security to counter malnutrition, hunger, and poverty.

To this end, the Budapest Centre decided to support the social business cause as lack of food security, mainly in fragile states, might lead to the occurrence of mass atrocities, as well as lack of prevention of atrocity crimes might drastically decrease food security in the countries in which the atrocities occur. Prof. Enzo Le Fevre, Director of Research and Cooperation of the Centre, is co-chairing the Community of Practice on Genocide Prevention and Development, founded in early-2013 in the context of the World Bank-IMF Global Forum on Law, Justice, and Development, and launched Deconstructing Mass Atrocities and Development – a series of sessions in the context of the Global Forum to raise awareness and foster action to further include a mass atrocity lens in development policies and practices. 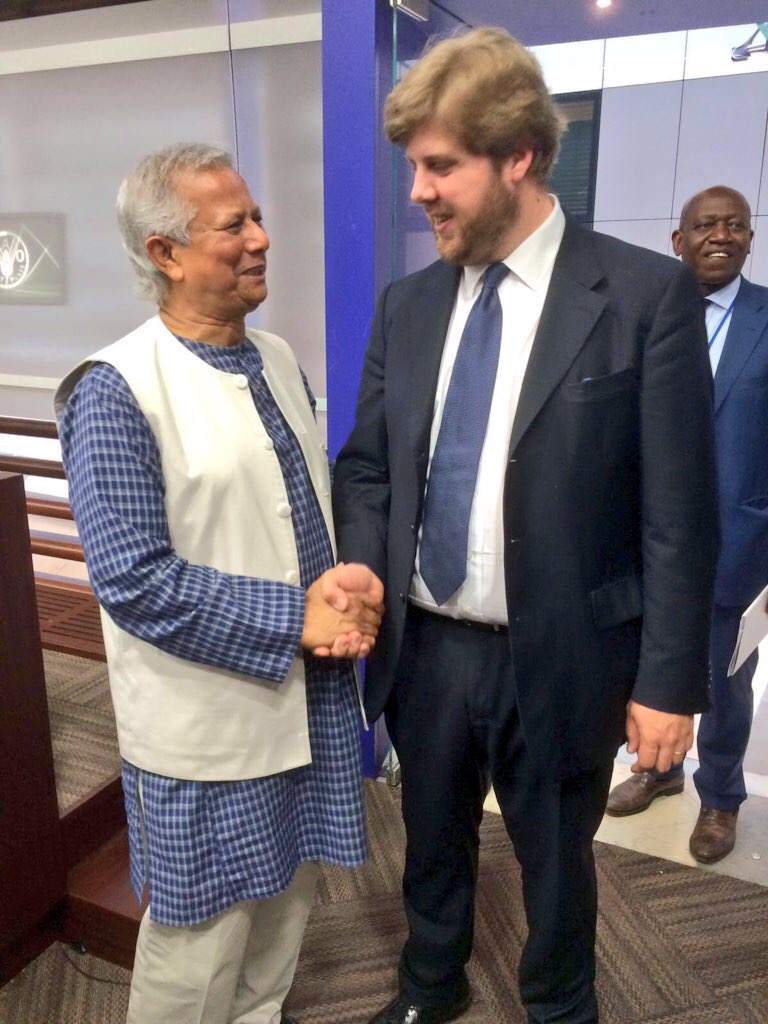 During the first round table, “Food industries and Social Business united for 0 hunger,” the panelists, supported by Professor Muhammad Yunus, addressed the importance of social business to fight hunger and poverty by discussing the experience of their companies and their accomplishments after both embracing the social business vision and starting to cooperate with other companies to reach zero hunger, as it is also one of the most relevant Sustainable Development Goal to be achieved by the end of 2030. As they firmly remarked, providing individuals with the right amount of food does not necessarily contribute to the reduction of malnutrition and poverty, as it is also fundamental to provide them with the right quality of food. Hence, promoting food security implies the guarantee to all individuals of both the adequate qualitative and quantitative amount of food.

Compared to the previous round table, in which the representatives of the companies clearly illustrated their contribution to the promotion of social business and, therefore, to the fighting of poverty and hunger, the panelists of the second round table, “How can the traditional banking sector support Social Business for 0 hunger objectives,” also described the limitations of the banking sector in adopting the social business vision. In fact, as one of the panelist claimed, the primary objective of all businesses is to make money. Hence, he argued that the banking companies would adopt the social business cause only in the case it is beneficial for them in terms of monetary benefits. Morality and ethics are not enough to persuade them in embracing this vision. 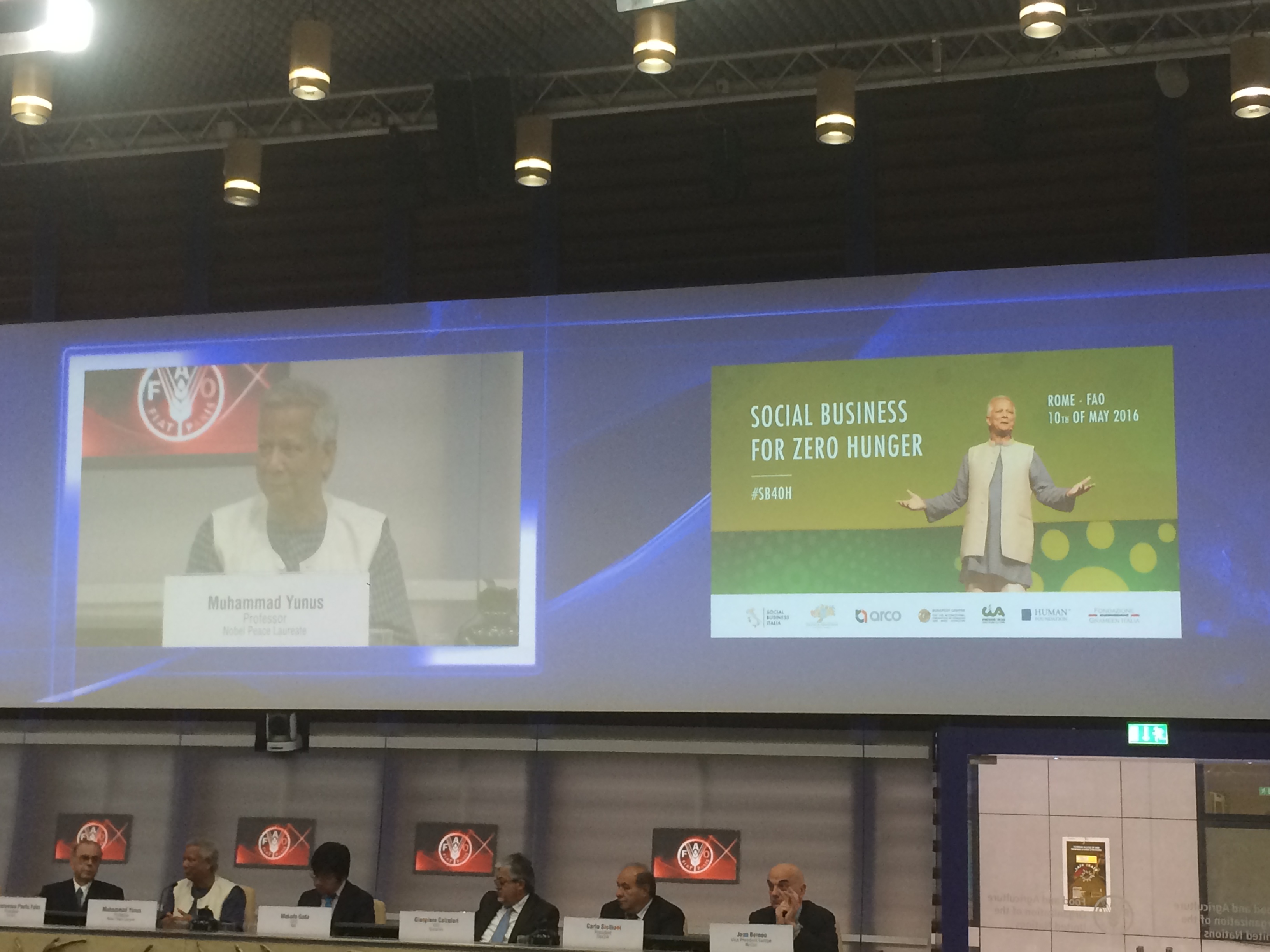 International, regional, national, and local events addressing these issues have becoming more and more widespread. To this purpose, the Law, Justice and Development Week 2016 will convene a broad community of development professionals who use law and justice tools to battle poverty and boost shared prosperity. As the theme for this year’s event is “Law, Climate Change and Development,” the Budapest Centre will lead a session on the nexus between climate change, food security, and mass atrocities prevention.

More cooperation and collaboration are required to develop and foster innovative and sustainable actions, such as the one of social business, aimed at addressing food insecurity, which is one of the main causes of state fragility where the risk of mass atrocities steadily increases. All actors of the international community are, therefore, invited to join the social business cause as there is a necessity to broaden the network and fight the damaging impacts of food insecurity on both societal and political stability. Shifting the objective of businesses towards the necessity to overcome poverty or issues, such as education, health, technology access, and environment, which threaten people and societies, represents only the first of the seven principles that, according to Professor Yunus, every Social Business should follow. However, he concluded, embracing this vision with joy is key to generate socio-environmental benefits for all. Indeed, as he stated, “Making money is a happiness. And that’s a great incentive. Making other people happy is a super-happiness.”

At the margins of the meeting Prof. Le Fevre briefly confronted FAO General Director Da Silva on the role of FAO in maintaining peace and security. Both Yunus and Da Silva agreed that “Where food security can be a force for stability, we have to look to food and agriculture as pathways to peace and security. This is a great challenge, but one that we can meet together as we embark on achieving the 2030 Development Agenda.” 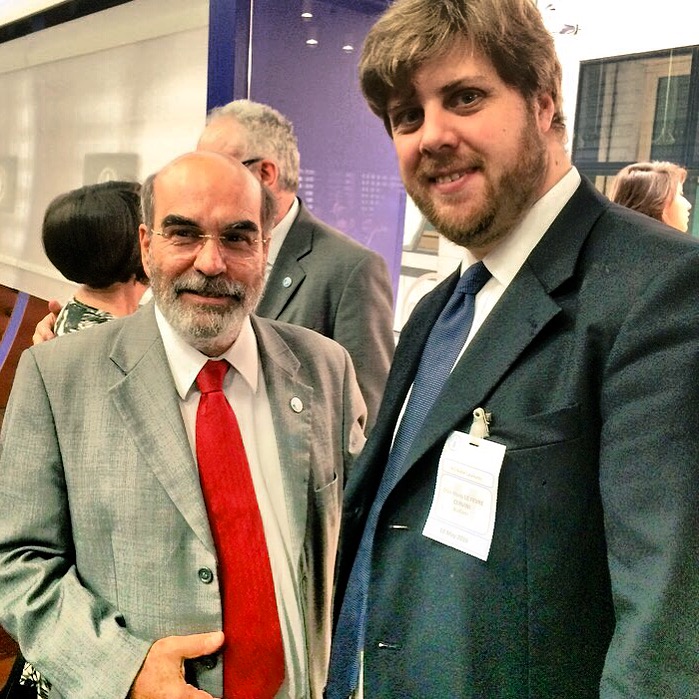