BC @ the “Religion and Diplomacy: A new Strategic Pillar for a Comprehensive Mediterranean Dialogue” International Conference

In March 17, a delegation of the Budapest Centre attended the “Religion and Diplomacy: A new Strategic Pillar for a Comprehensive Mediterranean Dialogue” international conference organized by ISPI and hosted by the Italian Ministry of Foreign Affairs. The conference saw the participation of several international experts in the field of both religion and international relations that highlighted the urgent necessity to foster the positive role of religion in world politics.

The conference opened with the warm welcome of Antonio Bernardini, Vice Secretary General of the Italian MFA and International Cooperation, Giancarlo Aragona, President of ISPI, and Fabio Petito, Senior Lecturer in International Relations at the University of Sussex. Before introducing the panelists, Fabio Petito addressed the need for a new comprehensive Mediterranean dialogue as crucial in countering the proliferation of antagonist narratives of the Mediterranean as a fault line of the civilization clash. More importantly, he stated, “Religion does not need to be seen only as a problem but it can be part of the solution: it can actually represent a strategic resource for diplomacy, peacebuilding, reconciliation, and non-violent civic and democratic engagement in the region.” Indeed, Ministries of Foreign Affairs (MFA) of EU countries, such as Germany, UK, France, Italy, Switzerland, the Netherlands, Norway, and Hungary have started to strengthen their capacity to engage with the unexpected global resurgence of religion in international affairs in order to “make better policy and a bigger difference.” After describing the structure of the symposium, he left the floor to the speakers.

Two panels assessed the available and putative tools to integrate religion in foreign policy, focusing on the Western discussion on religion and diplomacy as well as the religious engagement in the current Mediterranean crisis and the strategies to strengthen it. Specifically, Armando Barucco, Head of Research, Policy Planning and Historical Diplomatic Documentation Unit at the Italian MFA and International Cooperation, Nigel Baker, British Ambassador to the Holy See, Pierre de Charentenay, member of the Board of Writers of “La Civiltà Cattolica,” Douglas M. Padgett, Senior Adviser of the Office for Religion and Global Affairs of the US Department of State, Sergio Yahya Pallavicini, Vice President of the Italian Islamic Religious Community, and Scott Thomas, Senior Lecturer in International Relations and the Politics of Developing Countries at the University of Bath, discussed the evolution of the role of religion since the Peace of Westphalia, emphasizing the impact that religious leaders have today on the promotion of religion freedom as an essential right that every individual should be provided with. In addition, Armando Barucco stressed the importance of early warning strategies and preventive diplomacy as helpful tools to manage crisis, such as the ongoing Mediterranean one, and brought the example of Sudan, in which religious leaders played an essential role in limiting the escalation of violence. Referring to the Marrakech meeting on religious minorities in January 2016, Nigel Baker reported the foreign policy priorities concerning countering terrorism and extremism, the necessity to strengthen states’ capabilities and policies through trainings on religious literacy and exposition of diplomats to academic think tanks, the Italian comparative advantage regarding its domestic resources, and the need to build up a knowledge base on religion and diplomacy.

The second panel was moderated by Amb. Pasquale Ferrara, Italian Diplomat and Senior Fellow at Robert Shuman Center for Advanced Studies of the European University Institute, who is also the initiator of this important initiative. Speakers included Arc. Paul Gallagher, Secretary for Relations with States at the Holy See, Shahrzad Houshmand, Professor of Interreligious Studies at Pontifical Gregorian University, Alberto Melloni, Professor of History of Christianity at the University of Modena and Reggio Emilia, and Nino Sergi, President of Emeritus of INTERSOS. Pasquale Ferrara introduced the discussion by addressing the role of religion in the promotion of international cooperation between all States and Civil Society Organizations and encouraged collaboration among all actors of global governance in fostering religion freedom. During the analysis of the possible necessary tools to strengthen religious engagement, Arc. Gallagher mentioned the concept of the Responsibility to Protect as a tool that should push religious leaders to contribute to the local reconciliation in Iraq and the end of the local ceasefire, to promote the need to recognize the military intervention in Iraq in 2003 and its failure, and to prevent crimes to civilians and minorities in Libya. Although R2P does not reckon on disarmament, it includes the responsibility of the international community in countering hate speech, terrorism, violence, and extremism.

Prof. Enzo Le Fevre, Director of Research and Cooperation of the Budapest Centre intervened during the international conference asking to Arc. Gallagher about the individual Responsibility to Protect of religious leaders in protecting minorities. On behalf of the Budapest Centre, Prof. Le Fevre had previously participated in the first of five regional meetings of the forum for Religious Leaders on the prevention of incitement to violence and crimes against humanity promoted by the United Nations Office of the Special Adviser for the Prevention of Genocide and held in Treviso (17/18 September 2015). As drafted in the Fez Declaration and as remarked in the conference, representatives from different religions are now more concerned with religious-based mass atrocities and with the increasing number of reports about ‘hate speech’ and incitement to violence in all the regions in which the level of religious tensions is relatively high. 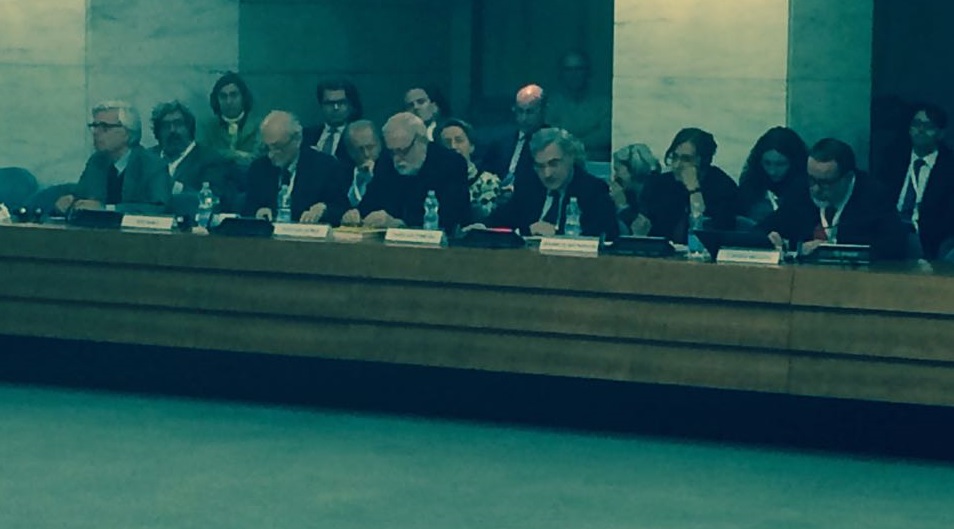 Furthermore, all the panelists agreed about the consequences of religious tensions and violence. Most importantly, they stressed that religious tensions do not only lead to religious wars and crisis, but they also represent the main causes of migration, affecting, therefore, the international, regional, and sub-regional actors of the entire global community. Consequently, international, national, and local actors of global governance should address the role of religious leaders with the aim of building a more integrated and responsible society, through the monitoring and management of the political and geo-political dimensions of religion.

The Budapest Centre for the International Prevention of Genocide and Mass Atrocities will respond to the human emergency call that the European Union and the international community have been facing by being a proactive organization within the European network aimed at supporting the promotion of religious engagement. Furthermore, it will focus its core activities on the need to raise awareness about the urgency of this issue as well as on the promotion of trainings in which leaders will receive recommendations on how to strengthen the current initiatives to counter ‘hate speech’ and violence and to prevent atrocity crimes and crimes against humanity.