The BC @ Fragility Forum 2016 – SDGs for All: Taking action for peaceful and inclusive societies 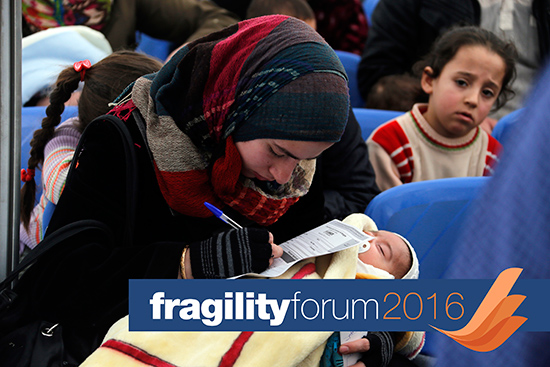 In March 1-3, 2016, Prof. Enzo Le Fevre Maria Cervini, Director of Research and Cooperation of the Budapest Centre for the International Prevention of Genocide and Mass Atrocities, attended the Fragility Forum 2016 in Washington DC.

The challenge of fragility, conflict and violence has become increasingly complex, spread across a wide range of countries, regions and urban centers. The recent spike in conflicts has led to an increase in casualties, with 60 million people displaced globally – the highest level since the end of World War II.

In recent years, fragile states and partners have undertaken initiatives that are well aligned with the SDG framework. The New Deal for Engagement in Fragile States, and the recommendations from the World Bank’s World Development Report 2011 on Conflict, Security and Development are both highly complementary. Yet, more needs to be done to reorient development programs to make them more effective on the ground. To help meet this challenge, the World Bank Group Fragility, Conflict and Violence Forum 2016 focused on how to realize the SDGs in fragile and conflict-affected states, with special attention to SDG16 – promoting peaceful and inclusive societies, providing access to justice, and building effective, accountable and inclusive institutions – as a critical foundation for sustainable development.

Opening the Forum, World Bank Group President Jim Yong Kim emphasized the urgency for collective action and policy evaluation at both national and international level, and set the stage for discussions by posing 6 key questions, asking participants for ideas to help rethink collective responses to fragility and conflict. During the meeting, all the speakers and the participants agreed upon the need of strengthening partnerships for urgent action to tackle fragility and global response to forced displacement. Therefore, it was highlighted the importance of technology to end poverty in fragile settings as well as the role of education in conflict-affected countries. Furthermore, the panel discussed about the contribution that the private sector could give in transforming fragile and conflict situations and the impact that democracy and inclusion could have on the prevention of violent extremism. An active argument was on the refugee crisis in Central America and on the gang violence, domestic violence, and persecution of vulnerable groups, such as women and children.

Ensuring employment, justice, and security are only three efforts that the international community should carry out to limit the escalation of violence and address the root causes of fragile and conflict situations. Civil society actors are the most involved and active ones in the fight for preventing the occurrence of conflicts and violence in fragile countries. Indeed, the role of civil society is crucial in promoting peaceful and inclusive societies, providing access to justice, and building effective institutions in fragile and conflict-affected countries. Hence, the World Bank and the international community should support the efforts of CSOs and strengthen their role at the national and regional level.

The Budapest Centre for the International Prevention of Genocide and Mass Atrocities will then contribute to the dissemination of the outcomes of the Fragility Forum 2016 and support the States in guaranteeing access to justice and in promoting peaceful and inclusive societies in fragile countries.