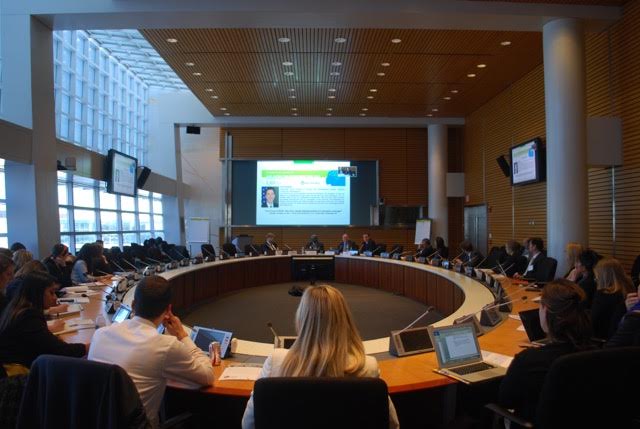 On November 16, the Budapest Centre convened in Washington DC the session “Ten Years of RtoP: The Way Ahead. Implementation of a normative principle” in the framework of the Law, Justice, and Development Week (LJD Week) hosted by the World Bank from the 16th to the 20th of November.

The session discussed the incredible achievements, sour failure, and upcoming challenges of the Responsibility to Protect and the community involved in its implementation, from states to supranational actors, from grassroots organizations to UN specialized agencies. The event was opened with a welcome introductory speech from Professor Le Fevre, Director of the Research and Cooperation of the Budapest Centre and co-chair of the Community of Practice on Development and Mass Atrocities prevention of the Global Forum on Law, Justice and Development, which was founded in early 2013 in the context of the World Bank-IMF Global Forum on Law, Justice, and Development. 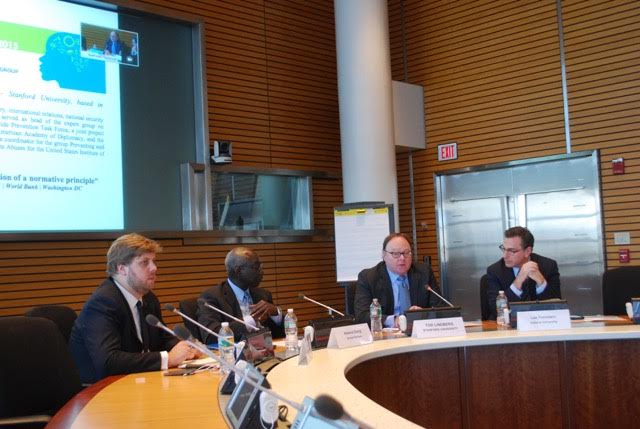 Three outstanding experts took part at the session: Adama Dieng, UN Special Advisor to the Secretary General on the Prevention of Genocide, Tod Lindberg, Research Fellow at Hoover Institution at Standford University, and Lee Feinstein, Dean of the School of Global and International Studies at Indiana University. The session also featured the excellent contributions of many attendees such as journalists, practitioners and experts in the area of RtoP and prevention of atrocity crimes.

In his speech, Professor Le Fevre has highlighted the role of the Budapest Centre in helping bridge the gap between early warning and early action in the prevention of genocide and mass atrocities. He has also recalled that, throughout its engagement with the Global Forum, the Budapest Centre has repeatedly advanced the view that there is no security without development and there is no development without security. In this spirit, he argued that RtoP and the Sustainable Development Goals can and should be considered connected to each other in order to ensure that the security dimension is included and implemented in all development actions.

The session was introduced by a key–note speech of Adama Dieng, who pointed out that the formulation of the principle of the responsibility to protect adopted in 2005 has proven farsighted for four reasons. First, it employs a narrow scope, which has helped to ensure that the RtoP remained focused on specific obligation under international law. Second, the 2005 World Summit Outcome clarifies who bears the responsibility to protect, establishing the primary responsibility to national authorities and, secondarily, to the international community, as an obligation to take collective responsibility and action when states are either unwilling or unable to do so. Thirdly, the formulation of this principle makes clear that RtoP and state sovereignty are mutually reinforcing since, while protecting populations, RtoP also respects and strengthens state sovereignty. Fourth, RtoP definition limits the potential for abuse of the principle in the pursuit of other political objectives. 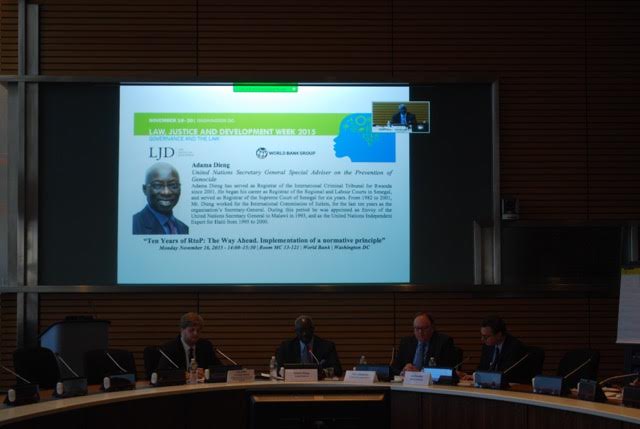 During his speech, Adama Dieng has claimed that all these elements of the responsibility to protect have proven to be both politically and practically powerful because they have developed consensus on the principle and have identified a clear articulation of means available and actors responsible for the protection. Moreover, the UN Special Advisor talked about different promising developments that demonstrate how RtoP has achieved political support and policy relevance. However, he claimed that the world is also witnessing an alarming decline in the protection of human rights and respect for international humanitarian law. For this reason, he argued that the UN and the international community as a whole should do better not simply because atrocity crimes present a deep affront to our common humanity, but also as a matter of pragmatic policy. Thus, Adama Dieng clearly claimed that there is a need to accelerate implementation of the responsibility to protect and invest new resources in atrocity prevention.

Moreover, Dieng stressed that development actors also need to understand and specifically incorporate atrocity risks into their strategies and priorities. What he believes to be required is a greater appreciation of atrocity crime risks and a willingness to revise priorities accordingly. Development actors are well placed to make a significant contribution since they operate in contexts where limited adjustments may help mitigate risks before they escalate into more severe challenges.


Professor Lindberg and Professor Feinstein lead the rest of the session focusing on the prospects of a transatlantic cooperation on RtoP.

In particular, Professor Lindberg talked about the Obama administration’s approach to RtoP and its commitment to prevent crimes against humanity. He highlighted that President Obama recognized the prevention of genocide and mass atrocities as a core US national security interest and that during his presidency he established an Atrocity Prevention Board (APB), a group of U.S. officials convened by the National Security Council that includes representatives from the Departments of State, Defense, Justice, and Treasury, as well as from the U.S. Agency for International Aid (USAID), the intelligence community, and other groups. In addition, Professor Lindberg explored the mandate, successes and failures of the APB and commented on Obama administration’s approach to the Board.

Since this year, 2015, marks the tenth anniversary of the World Summit in which Member States embraced the Responsibility to Protect concept entailed in paragraph 138-139 of the Summit Outcome Document, this session aimed at shading light on the future implementation of RtoP and on the possibilities and prospects of a transatlantic cooperation in the field.


The Budapest Centre wishes to thank the World Bank, all the panelists for their excellent contributions, and all the attendees for their engaged participation in the event.

Read the programme of the event here.