Webster University seminar on "The future of the Responsibility to Protect"

On December 9, 2014 at the Palais des Nations, Director Enzo Maria Le Fevre Cervini discussed the role of regional arrangements in fostering pillar II of RtoP, paying special attention to the role of the EU.

The central questions that the seminar “The future of the Responsibility to Protect” organized by Webster University with the support of the “R2P CORE GROUP” of the Geneva Based Diplomatic Missions wanted to address were: “What is the future of the responsibility to protect?”, “Will it be credible and will it effectively deter potential perpetrators?” “How to design and implement prevention?” and “Will it contribute to a lasting improvement in domestic and international political order to the benefit of all humanity?” 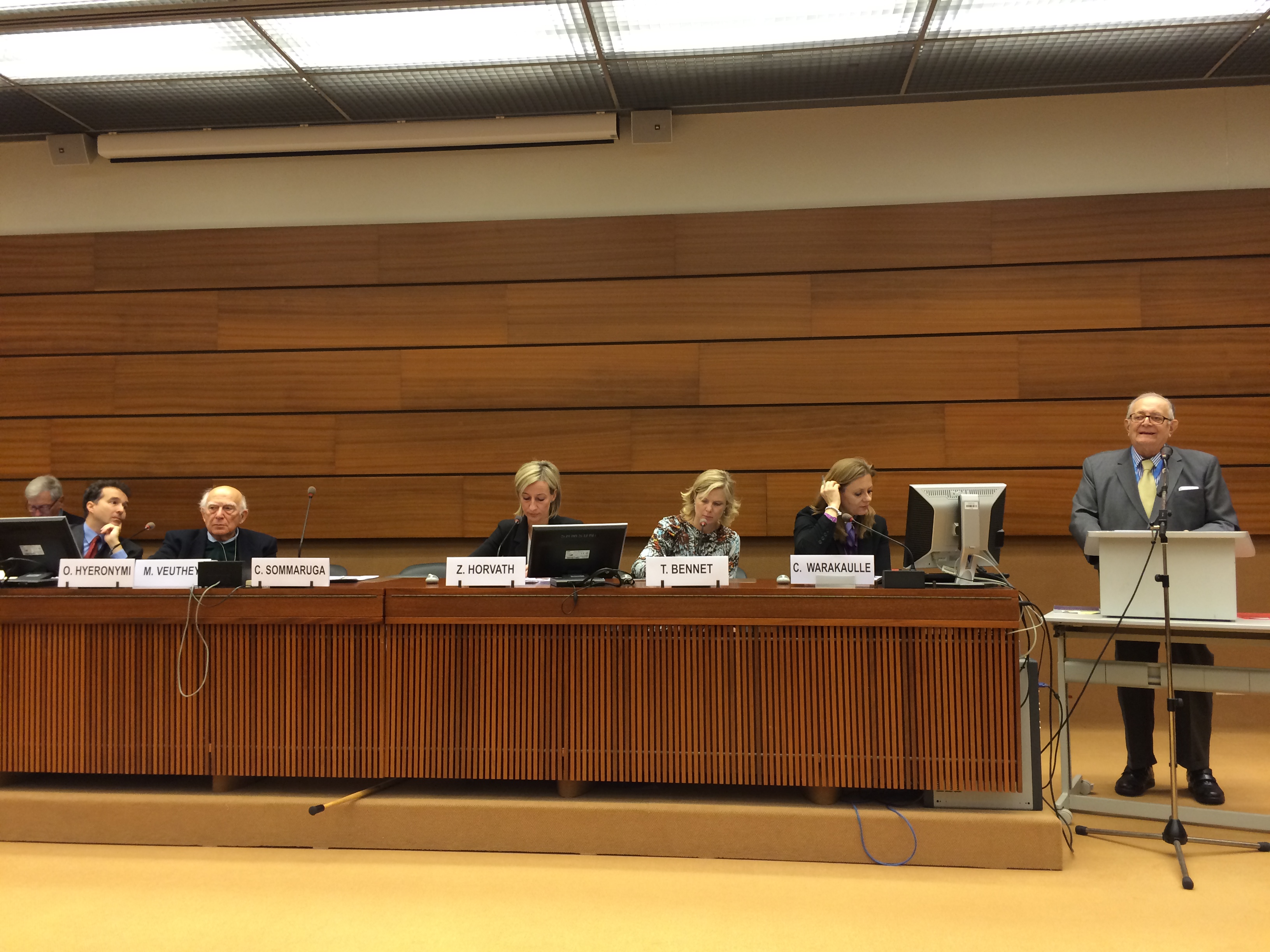 Statement by Mr Enzo Maria Le Fevre Cervini,
Director of Research and Cooperation of the Budapest Centre for the International Prevention of Genocide and Mass Atrocities

Let me start by thanking Professor Otto Hieronymi  for organizing this event, and Cornelio Sommaruga for his incredible remarks.

I was asked to speak on the future of the Responsibility to Protect and the role of the European Union in fostering its second pillar.

The role of Regional Mechanism is an essential one in the global architecture for the prevention of atrocity crimes. Regional organizations are key players in contributing to peace and preventing conflicts. This is very true when we speak about a region, like Europe, that has been experimenting peace for more than 60 years after the dark years of the Second World War and the Holocaust.

Regional and sub-regional organizations are the future of the Responsibility to Protect. They have a well-founded knowledge of the area in which they operate, can have a geographical proximity to the place where the crimes are being committed, and can have strong connections with local actors and other members that can take part to solution finding processes. Their major role in helping states prevent atrocity crimes is explicitly recognized in Article 33(1) of the UN Charter in Chapter VI that mentions how the parties to ‘any dispute, the continuance of which is likely to endanger the maintenance of international peace and security, shall, first of all, seek a solution by […] resort to regional agencies or arrangements […]’. In addition, in a growingly multipolar world, states and governments experience the need to resort to regional organizations to better address the variety of issues and challenges that they are called to face.

In addition to this intraregional exchange, regional organizations can also learn from each other. According to the diffusion theory, learning, social learning, mimicking, competition and coercion, are the five elements that induce one institution to follow the path traced by another. This holds true even in the relationship between regional organizations. In fact, EU effective economic cooperation became a useful scheme for ASEAN. Similarly, EU instruments and policies for prevention and rebuilding could be used by other regional organizations, which, though selectivity, can even ameliorate and strengthen the initial model. EU sharing of lessons learned are an added value for other regional organizations which find themselves at an earlier stage of development.

In the realm of regional organizations, the European Union, has the greatest potential to operationalize the Responsibility to Protect, as remarked by Former Australian Foreign Minister Gareth Evans, co-chair of the ICISS and one of the founders of the Responsibility to Protect, for two main reasons. The first is that the EU is widely considered a normative power, a model in conflict prevention within its geographical area. The second is that the EU already possesses well-established instruments and policies for prevention and rebuilding. What should be added to this two-point scheme is the abundance of EU soft power exercised through its large market, an envied welfare system, its varied cultures and the frontline promotion of human and civil rights.

Thus, the tools for prevention at the EU disposal are several. The first is the EU Generalized System of Preferences, an incentive that draws the standards that vulnerable countries have to live by and ratify in order to benefit from an increased access to the EU market. The EU also has a “human rights clause” in its cooperation and association agreement with 120 countries, which makes the respect of democratic principles and human rights the necessary elements for the continuation of the agreements stipulated with those countries. Also, the more-for-more strategy, in the context of the European Neighbourhood Policy, offers greater partnership opportunities to those countries that make more progress towards democratic reforms. These systems, under the perceived threat of travel bans, asset restrictions, arms embargoes, diplomatic sanctions and more, can foster change within vulnerable states.

The creation of the EEAS has increased EU forecasting capabilities especially thanks to the network of 141 delegations, field missions, special representatives in specific regions, and the EU satellite centre that monitors and analyses international and local reports. EEAS’s recruitment of diplomats from member states can further help with prevention. The combined effort of INTCEN and EUMS INT allows the EU to draw its preventive capabilities on a wide range of intelligence material.

Aid can also be used as a conflict prevention tool. The EU is one of the largest aid donors in the world that, together with the 141 delegations in non-EU countries, also has 16 civilian and military missions worldwide, which are involved in a very wide range of activities. As a cluster of many different member states, each with its own priorities, the EU is seen as being more neutral and less political than its member states, which is one of the reasons why EU delegations stay on the field after others have abandoned it, engaging in local partnership and acquiring even greater experience in peacebuilding. All this is guaranteed by the considerable resources on which the EU can count upon. Moreover, the establishment of the European Commission for Democracy and Human Rights and of the Instrument for Stability has been key to structural prevention though civilian involvement.

Mass atrocities prevention goes hand-in-hand development. By operating ‘on the ground’, aid agencies are in a privileged position to support the second pillar of the Responsibility to Protect. In a Budapest Centre panel on “The Role of Development Agencies in the Prevention of Mass Atrocities,” Lawrence Woocher, Senior Atrocities Prevention Fellow for the Human Rights Team of USAID, argued that while issues of state sovereignly remain complex within the Responsibility to Protect, aid agencies do dispose of several effective prevention tools even in cases where the perpetrator is the state itself. For example, aid agencies can work on strengthening civil society networks in risk affected environments, promote reconciliation, and participate in risk assessment activities. Therefore, strengthening the role of EuropeAid could work as preventive tool and could further fulfil the second pillar of the Responsibility to Protect. 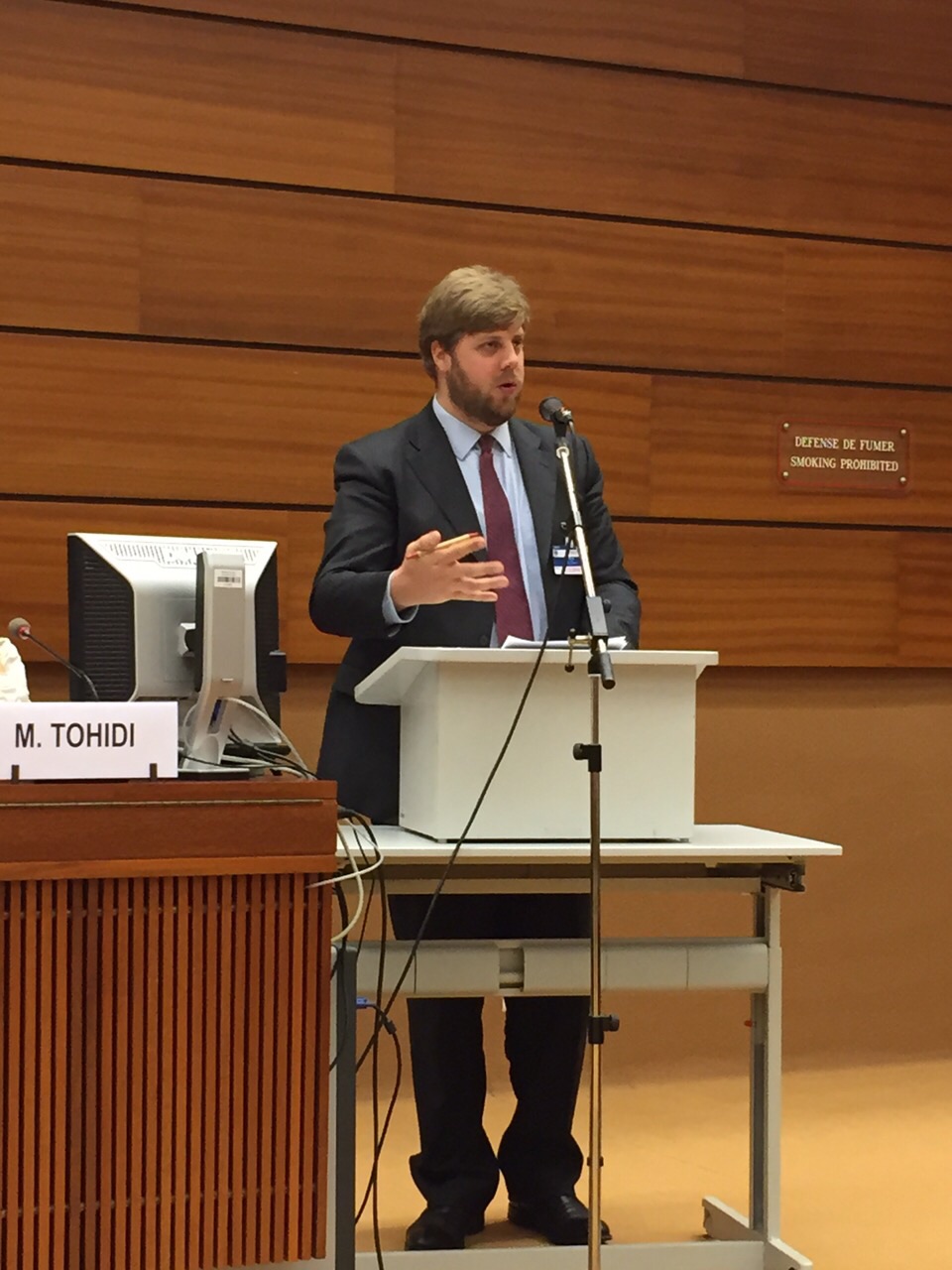 In this context, the role of private donors and private foundations could also be vital as they could finance research, training and other activities that could help with prevention. Private foundations, due to independence and reduced institutional constraints can better respond to early warning signals of impending mass atrocities, for example through the allocation of foundation resources for the implementation of small-scale “kick-starter” interventions and providing seed-funding specifically for preventive action in response to early warning signs.

The European Parliament adopted a recommendation on the UN principle of the ‘Responsibility to Protect’ (‘R2P’) on 18th April 2013 where it urged the Council to arrive at a common understanding on the implications of the Responsibility to Protect for the EU’s external action and the role its actions and instruments can play in situations of concern. In particular, it urged the Commission, the EEAS and the Member States to model crisis responses and development policies on a human rights based approach. However, the EEAS has not shown a sharp commitment towards the implementation of this recommendation. This calls the EP AFET/DROI committees to set the issue on their agenda in the first months of 2015.

Regional Organizations in Europe have also acquired a great deal of expertise in supporting electoral processes that have been identified as major triggering moments for mass atrocities. EIDHR provides elections assistance and observation missions. OSCE’s Office of Democratic Institutions and Human Rights carries out additional observation missions within member states. EU prevention also goes through transitional justice programs that have always been encouraged and financed by the union. Of particular importance is the EU support to the ICC, practically translated in the presence of an ICC clause in almost every agreement that the EU signs with third countries.

Prevention and assistance to states can also occur by using diplomatic instruments, such as dialogue. A Mediation Support Team has been created within EEAS Conflict Prevention, Peace-building and Mediation Instruments Division, which provides support, training, and sharing of lessons learned with other EU colleagues who are also engaged in mediation exercises.

However, as in other regional contexts, challenges exist to the promotion of the Responsibility to Protect in the EU mainly because member states have different views about the very meaning of the Responsibility to Protect. In any case, “The EU has a strong self-interest in strengthening its capacities to prevent mass atrocities as they can undermine development policy, lead to an exodus of large numbers of refugees, destabilize neighbouring countries and regions, and create lasting grievances and future conflicts” (European Task Force). This calls for a series of recommendations, especially tackling EU prevention assistance to vulnerable states, which have also been thoroughly outlined in the Budapest Centre Task Force on the EU Prevention of Mass Atrocities:
Given the success of the methodology used for the “EU Task Force,” the Budapest Centre decided to implement a task force on the African prevention of Mass Atrocities. This project aims at producing concrete conclusions and recommendations on how to improve the capacities and capabilities of the African Union (AU), the Economic Community of Western African States (ECOWAS), the Intergovernmental Authority on Development (IGAD), the International Conference on the Great Lakes Region (ICGLR), and the South African Development Community (SADC) to better prevent, respond and rebuild in the face of mass atrocities. The conclusions and recommendations included in the Report will help re-shape the policies of the African Union and the RECs involved in the study and will transmit to donors the priorities on how and where actions should be taken to foster the capacity of these organizations to better put in place actions to prevent mass atrocities. 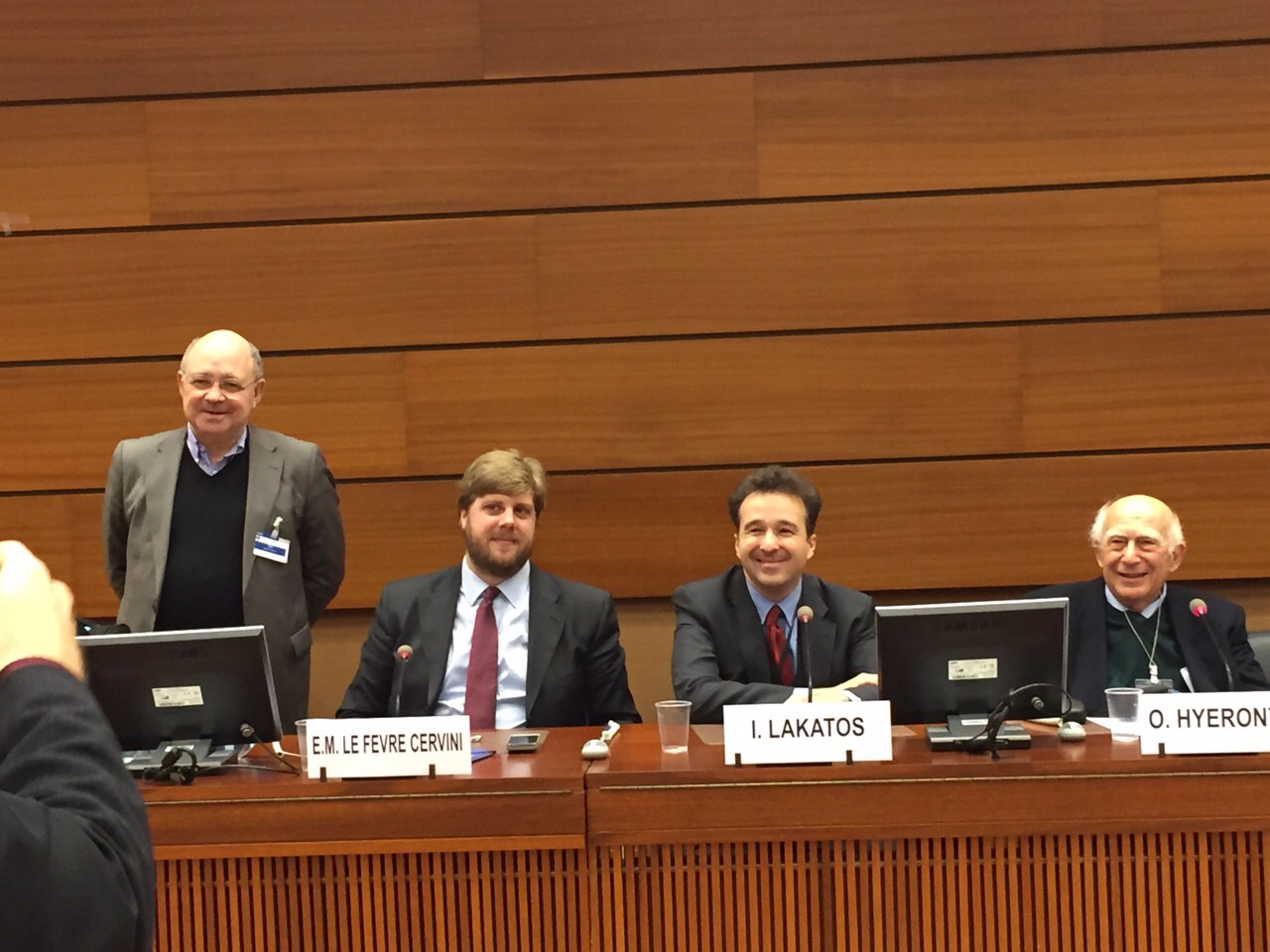 The difficulties that the EU is still encountering in operationalizing the Responsibility to Protect are by no means a sign that the Responsibility to Protect has no future. In fact, there is now greater consensus within member states and within the international community on how not to react in case of mass atrocities. The scale of human rights violations witnessed during the Libyan and Syrian cases are certainly a warning sign to the international community that reacting when the engine is already in motion is costly and hazardous. This assigns an increasingly fundamental role to the second pillar of the Responsibility to Protect, giving hope to those preventive structures and initiatives put in place by the EU, which could be applicable to other regional organizations.

Thank you all for your attention.

For more informations on the seminar please visit Webster’s page